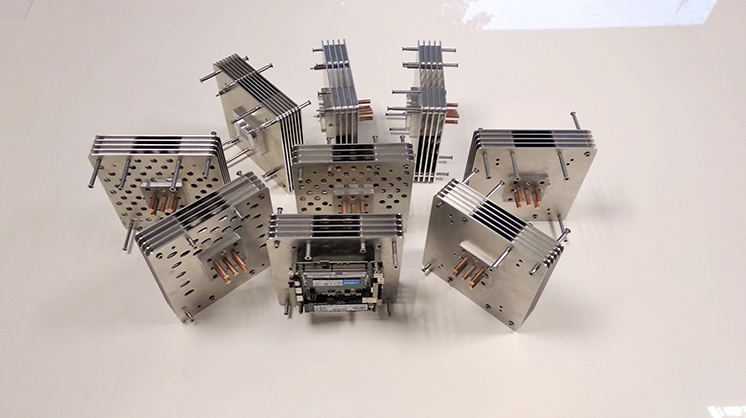 We have done quite a bit of testing lately in order to further improve the cooling performance of our fanless designs. Especially for the new version of the cirrus7 nimbini v2.5 which is based on the Intel NUC8 line (Bean Canyon). These NUCs are running a lot hotter than the previous Baby Canyon NUCs. Intel rates the NUC8 line with 28W TDP nearly as high as the 35W T-CPUs from the desktop CPU lineup and nearly twice as high as the mainstream U-series with 15W TDP. But 28W is an understatement. Under heavy load one can see that it draws a lot more power. On the other hand the i7-8559U offers nearly twice the performance of its predecessor as it features 4 instead of 2 cores. For that reason for the first time since the introduction of the NUC – intel has finally introduced a bigger fan for better cooling and lower noise levels. Also venting holes on the sides of the case were introduced. But even than: Under heavy load the new NUC8 will blow like a hair dryer.

Cooling this CPU fanless is much more challenging. So first we have tested over 40 designs by doing finite element thermal analysis. We then took the 10 most promising candidates to do real world testing. To keep the effort low we did not build the complete case but only the main cooling fins and also just half of the hight for the final design. There are some main parameters which will define cooling performance by natural convection.

After running hours of temperature tests we have finally found the ideal design. Our main goal was to be as good or even better than the original fan-cooled intel NUC in terms of cooling performance. Let’s see how it went.

How do we run our tests

Looking at the stock intel NUC8i7BEH there are two parameters which can affect the CPU temperature under a given load. First is the fan speed – of course – but secondly, if fan speed can’t be adjusted any higher the CPU clock is also adjusted. That does not necessarily mean that the CPU is throttling. Intel Turbo Boost is trying to keep the CPU clock high as long as cooling can handle and as long as the system does not draw more power than specified in BIOS settings. One speaks of throttling if CPU clock falls under the rated „Base Clock“ of the CPU. With unchanged BIOS settings intel tries to keep CPU package temp below 80 °C. Consequently the fan speed starts maxing out at around 70 °C.
In contrast to that: with a given fanless solution under a given CPU load there is only the CPU clock which can be adjusted if the natural convection is not sufficient to keep the CPU cool. So one also has to carefully watch the CPU clock to judge a fanless solution.
The most brutal load you can stress a CPU with is prime95. It is therefore a good testing tool. It is also a worst scenario tool. Because even heavy day to day load like rendering images with Blender e.g. is friendlier in terms of CPU heat. Our test script which have been refined over the years starts prime95 and records temperature and clock speed. The script stops under two conditions 1) a given temperature is reached (80 °C) or the temperature has not changed within one hour which is called steady state condition.
We tested with the hottest of all Bean Canyon CPUs the NUC8i7BEH (i7-8559U). With ambient temperature at 21 °C and standard BIOS-settings (Max performance mode under power settings in BIOS)

Idle temperatures were measured with system booted to Ubuntu 18.04 Desktop with monitor connected (after 1h).

This is a clear win but was to be expected as the NUC draws very little power (3-5W) idling. The idle temperature with the NUC is fluctuating because with standard BIOS settings the fan kicks in at 40°C and stops again at < 30°C. Even when idling the fan starts spinning from time to time to keep idle temps below 40 °C.

Now the fun part begins. As you can see on the diagram below:

That was better than expected. 12°C lower temperature with a fanless design. Next week lets see how much room there is for fanless overclocking. 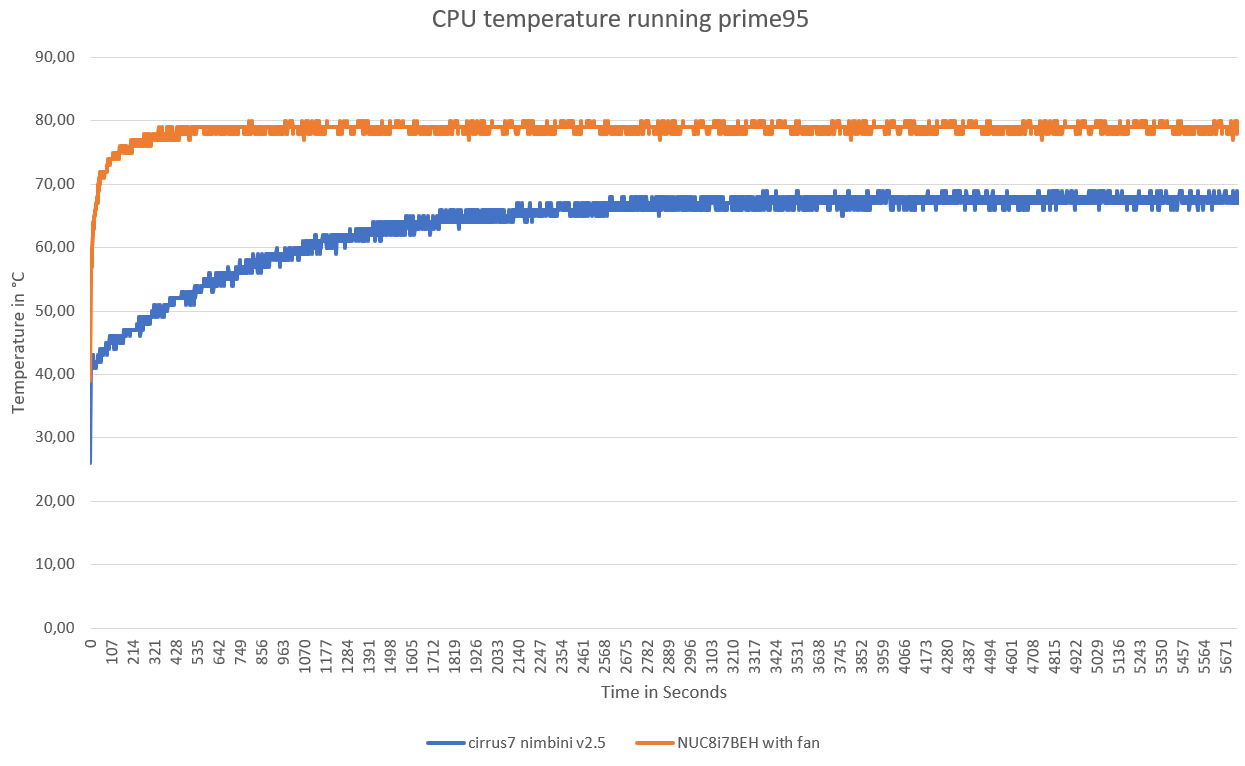