Many have been waiting for this for two years. Since yesterday, the final release of the newUbuntu LTS Version 12.04 “Precise Pangolin” released. How to get the update on the cirrus7 one You will learn in this step by step guide.

A cool overview of what’s new at Precise Pangolin is in the followingUbuntuusers Beitrag.

A reinstallation of the cirrus7 one its unneccessary. The standard update routine of Ubuntu works fine. The adapted fan control of the cirrus7 one remains after the update. There us Precise Pangolin Fortunately, it will take another five years to create a new repository. Currently there are the same package versions as in the oneiric repository. Nevertheless, we recommend switching to the new repository for the future anyway. 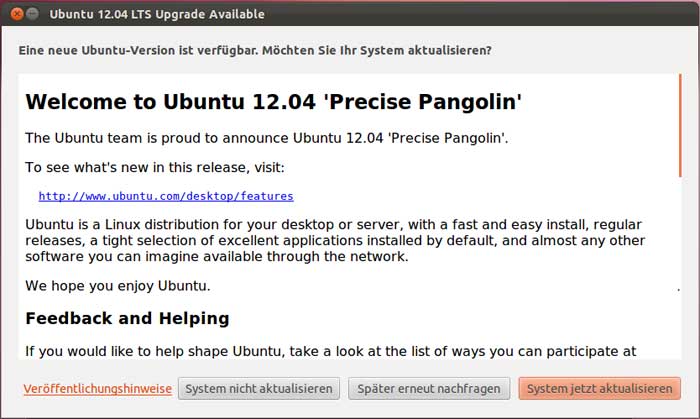 You can then click on “Update system now” directly. If the automatic update notification is deactivated, or if you have selected “Do not update system”, you can start the update procedure as follows:

From here you can easily get up“To update” to press.

An update of the package sources is sufficient. As already described, the packages themselves have not changed.

Restart your computer now. After the restart please check in a terminal if the fan control is working properly:

The number of revolutions of the fan should now be between 550-650rpm. And the temperatures should be displayed for all CPU cores.

If you have questions about the update process, please contact us. Have fun with Precise Pangolin!